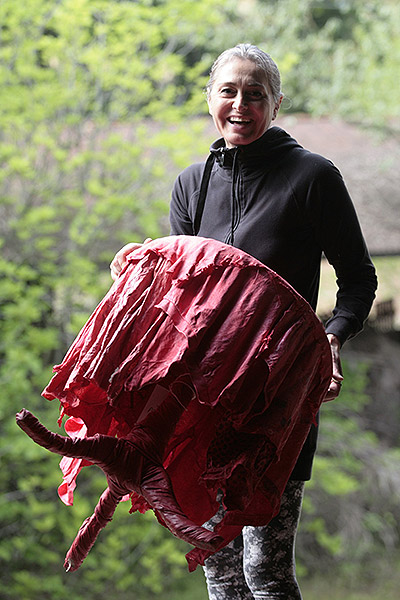 Passonia: the ‘character’ and the style

It is not easy to determine a precise connotation of Passonia’s, even considering valid and fitting the historical exploration, which, somehow, focuses on a trend well centered in her soul, which, besides being careful and sensitive, is also creative to a high degree.

In her Friulian ‘factory’, paintings, pieces of wood and crystallized (actually cementified) high-reliefs, fashion creations and daring design experiments live together in perfect accord. All devised by following a panache of her own, an indefinible line of her own whose causes she, herself, – though ignoring its origin – all the same identifies. First of all, a purely existential motivation and an extremely personal relationship with the materials and objects from daily life. In Passonia, there is a purely symbolic idea of the value of things, almost as if they were a sort of   visible surrogate wherein an indistintict, infinitely loftier visibile dimension reflects. A thing has a value if it useful, if it participates in a project and has a philosophical sense that gifts us with something deep inside: otherwise it is merely empty, superfluous matter, a vacuous exercise of the ephemeral, were it even fine gold or silver. After all, it was men, economic interests, business, who generated a scale of values, who attributed priorities and preciousness to natural elements and to the objects of one’s lifetime, based on perhaps aesthetical, yet surely non-ethical, criteria. A demeanour which is absolutely far from being meant as a sort of self-conscious relativism or hazardous nichilism that gobbles up and sets aside everything in a momentary glut. Passonia observes, recovers and generates unorthodox assemblies without caring if she dirties her hands. The artist’s sensitivity, refraining from compromises, does not fall for the facile flattering of the futile, venal gleam. At the centre of her heart she is intimately convinced that both the importance of things and aesthetical dignity may be hidden anywhere, in living-rooms as in forlorn cellars, in tidy wardrobes as well as inside landfills in the outskirts of towns. It is not even snobbishness, or a form of behaviour identifiable with alien-to-Italian words such as ‘trash’ or ‘grunge’ at any cost. Passonia is not interested in pre-established, imagery-creating epitethets, reflecting a sickening, transgressive sort of glamour.That is what she authentically is like and – we are tempted to say – due to a convincing call, not imposed by any sort of fad or anthropological conditioning.

That is because a true artist will always follow her – or his– own path or, at the most, will go with whoever is willing to share an ideal demeanour ‘with no ifs or buts’. At the most – as said at the beginning – we may refer to an introductory note to draw up a founding moment in the history of contemporary plastic arts. That Arte Povera [=art informel] was a revolutionary way of operating is a given that really has to be taken into account, since history itself rests upon a chain of events linked the one to the other. Therefore, it is appropriate to refer Passonia’s experience to a weightier kind of phenomenon which, in its own way, was groundbreaking, though with differing modalities. An indisputable link is the ecological idea underlying the already mentioned recovery, the reconsidering of the useless (or considered as such) discarded by dominating consumerism. Nowadays, hardly anything gets fixed. It is easier to tear down and substitute with what is new, often low-quality, and made shiny with colours decided by the market. Think of household appliances or furnishing items, and of urban fittings, or of the clothing that we wear. It is by no chance that tailor workshops or seamstresses – that, once upon a time, darned stockings or other daily life gear items – are disappearing. Consumerism rushes through our conscience with its persuasive strength, bordering upon the Unconscious. That is why we believe we can think, yet we are thought of. We feel we can choose, but we are chosen by multinationals. Said and discarded, in other words. There it is: the sickly love for the superfluous, for what is shoved upon us, for what is forcedly ‘new’. Yet, there are those who say ‘no, I won’t accept that’. Luckily.

The aesthetical dignity of humble things

Here we go back to being careful about what is marginal, what is improbable and forgotten. Passonia binds such awareness of an alternative thought with expressive incontinence. In fact, she is not contented with the bidimensional feature of ‘painted painting’, of informal virtuosities, though she has experienced them herself along the course of her inquiry. Abstraction, the intuitive liberation represented by the foolish colour of energy running on the canvas, do not suffice. It is mandatory to get back to the language of real things, to the vibration of that strong matter which can be felt in the weight, in the morphological features of the surface the artist is handling. Life is everywhere, since nothing remains halted in unending staticity. Matter and energy, which are the same thing, are indissoluble, we are told by quantum physics. Everything is plastic and dynamic life. Matter does not bring with itself solely its own momentary vibration but also the one that has gone by, mysteriously preserved in what we might define as ‘atomic memory’. When we peruse a centuries-old painting or sculpture, we realize that, in the colour pigment, in the substance of the apparent inanimate, there is something which goes beyond immanence. And we might think that, therein, is radicated the spirit of time, or the alchemical waft of whoever has passionately tampered with that work. The humble things recovered by Passonia come back to light through a process of rebirth which she, herself, methodically brings about when overcoming that mìmesis, or imitation, of classical aesthetics. Nothing can be more realistic that the presentation of the thing as it is, quite beyond its illusory ‘representation’. Thus we have stockings worn out through use, simple fabrics, rags and items of clothing crystallised in the very moment that they talk to us in the jargon of an endless communion. Elements which are regenerated after the artist’s creative handling, a joyous tactile manipulation modifying and increasing the worth of the object. In the end, everything cooperates and interacts towards a shared destination –that is what seems to be the underlying teaching. An existential type of dynamics that man fails to understand and employ in the age of the most exasperated individualism. The exclusive creations she designs – such as tables, vases, living-room chairs – outline an unmistakeable style determining a precise taste, an intimately personal, achieved choice. Just as with the exclusive handbags with unpredictable chromatic folds and reflections, authentic, unique pieces of her most vital, sought-after output. The shape, the movement and the hues of ‘poor’ materials come back to life from the places where existence seems to have stopped in utter abandonment, since nobody any longer wants what is ‘old’. Even there, however, strangely enough, almost contradicting appearance, in the splendour of the dust, there is a kind of communication which rather than being a sound is an oscillation in waves from outerspace, a silent life which tells its story. Just the one that Passonia enjoys.